What happens to the glass you bring to the transfer station? 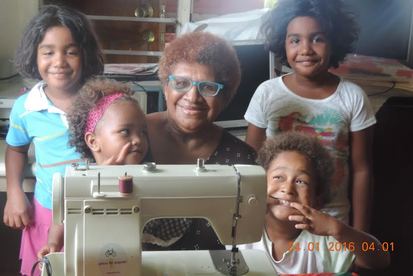 The May shipment arrived in Uganda on July 24, 2017. It was a long voyage but the boxes of sewing machines arrived safely.  Thank you.  (In 2016 we sent 43 machines; in 2017 we sent 95 sewing machines, including 3 treadles!) In 2016, Dan Farrar, transfer station operator at the Springfield Transfer Station, accepted unwanted, working sewing machines for "Sewing Peace," an initiative of Pedals for Progress. The year's total was 43 machines, some of which were shipped to Albania, some to the She Can Foundation in Tanzania, and all of the portables that were in their original plastic cases went to Ghana.Read more about the Foundation on the Pedals for Progress website.

The Problem:
"The poorest individuals in developing countries need work. Finding work, much less a career, in developing countries can require a Herculean effort. The barriers are often impossibly high and include widespread unemployment, limited education, inability to acquire credit, and discrimination. On top of this, many developing countries simply lack the industries, infrastructure, and robust economies that can keep people working."
​
The Solution:

What is leaf and yard debris? It's all of the following, and as of July 1, 2016, it is banned from the landfill. As of that date, haulers who offer trash collection must also offer a service to collect leaf and yard debris, separate from other waste. They may charge for this service. Residents may also bring this material to their transfer station where they may be charged a tipping fee. Clean wood or "wood waste" is also banned from the landfill as of July 1, 2016. What is "clean wood?" It includes trees, untreated and unpainted wood including dimensional lumber, and other natural woody debris, including tree stumps, brush and limbs 1" or greater in diameter, root mats, and logs.  Neither haulers nor transfer stations are required to collect clean wood. However, transfer stations may offer a spot for dropping off clean wood for other residents to pick up for reuse.

What to bring to a household hazardous waste collection? Products with labels that say:
CAUSTIC, CAUTION, CORROSIVE, DANGER, FLAMMABLE, POISON, TOXIC, or WARNING**

Please note:  Keep products in their original containers. Do not mix products. Never smoke near hazardous materials. Do not leave your vehicle when you arrive on site; you will be assisted by trained staff. The District has the right to refuse any material based upon its nature.
Please call 674-9235 or e-mail mobrien@swcrpc.org with questions.

Battery Recycling Update: Save Our Landfill!

Have you been throwing the used batteries from your remote controls, flashlights or toys into the trash? Stop!  Until recently that was acceptable in Vermont. However, since Jan. 1, 2016, the State has added single-use batteries (AA, AAA, C, D, 9v, hearing aid, coin cell, tool, and button) to the list of accepted recyclables.  What does this change mean for you as a resident? You can now recycle most household batteries at your closest transfer station. This includes rechargeable batteries which have been accepted since the mid-1990s.

Expanding battery recycling to include single-use batteries is a direct result of a product stewardship law the Vermont legislature passed in May 2014. The law (H. 695) makes Vermont the first US state to require single-use battery manufacturers that sell batteries in the state to pay for their collection and recycling. Manufacturers have voluntarily recycled rechargeable batteries since 1994. Under the program, battery recycling is free of charge for residents.

Since the law went into effect, the District has seen a jump in its single-use battery collections. The highest collection rate goes to the largest transfer station, Springfield, with a threefold increase in collections over all of 2015. Rechargeables have also seen an uptick.

Residents who visit the Springfield station will see a custom-built battery shed with separate compartments for different battery types. Dan Farrar, Transfer Station Manager, built the shed several years ago when local residents became frustrated by the lack of recycling for single-use batteries. “Intuitively people don’t feel good about throwing away batteries. They know there is value and materials should be reused,” said Mary O’Brien, recycling coordinator for the District.

In addition to transfer stations, Vermont residents can drop off their batteries at a Call2Recycle collection site; 96% of Vermonters have a site within 10 miles of their homes. Call2Recycle, Inc., North America’s largest consumer battery stewardship organization, is overseeing the state-wide program on behalf of manufacturers. Call2Recycle uses a network of recyclers who extract usable chemicals and metals for use in manufacturing new batteries, stainless steel and cement additives. You can find out more about what batteries are accepted and how they are recycled by clicking here.

Vermont has solid waste legislation that focuses on recyclables and organics. Act 148 Universal Recycling will lead to more consistent services throughout the state. To read more about this law, click here. If you would like to look at and/or use the new universal recycling symbols for recycling, food, and trash, click here.  Download the Universal Recycling timeline and/or a summary of the new law.

There are two important parts to the Vermont's e-waste (used electronics) law which took effect in 2011.  The first part is the landfill ban on many electronic devices as of January 1, 2011.  The second is the FREE recycling of certain e-waste (computers, computer monitors, CRT-containing devices, printers, and TVs) as of July 1, 2011. For the details, click on the Department of Environmental Conservation's website.  Vermont is the twenty-first state in the country to enact an e-waste law.  The free program is open to Vermont residents, charities, school districts, and small businesses with up to ten employees. In our District, the Cavendish, Ludlow, Rockingham, Springfield, and Weathersfield transfer stations have registered as free collection sites.
Southern Windsor/Windham Counties Solid Waste Management District
(802) 674-9235
Ascutney, Vermont